CARDIFF: Cristiano Ronaldo scored twice as Real Madrid beat Juventus 4-1 in a memorable Champions League final full of attacking verve and brilliant goals on Saturday as the Spaniards won the title for the third time in four years and 12th in all.

Portugal forward Ronaldo hit Real’s first and third goals to become only the second man to score in three European Cup finals and take his career goal tally to 600 for club and country.

Few of those will have matched Mario Mandzukic’s spectacular overhead equaliser for Juventus, which was eventually in vain for the Italian side who had the best of the first half before being swept aside in the second.

A long-range deflected effort by Casemiro and a neat finish by the irrepressible Ronaldo within four minutes effectively settled one of the most entertaining finals for years, with a late tap-in by substitute Marco Asensio adding the gloss.

The victory means Real are the first team to successfully defend the trophy in the Champions League era. AC Milan were the last team to retain Europe’s top prize when they triumphed in 1989 and 1990.

“It’s been a spectacular year, you couldn’t dream of anything better,” said Real coach Zinedine Zidane.

“We won the (Spanish) league on the very last day. It’s very difficult to reach the Champions League final two years running, but we did that.”

“The first half was difficult, but in the second we were quickly superior. We pressed a lot more and physically we won the game there too, so I’m very happy.”

It was heartbreak again for Juve, however, who were seeking a treble after winning the Italian league and cup. They came away as losers for the seventh time in nine European Cup finals having also lost to Barcelona in 2015.

The Italians let in more goals on Saturday than the three they had conceded in the 12 games they played to reach the final as a much-vaunted Real attack versus Juve defence scenario went emphatically in Madrid’s favour. 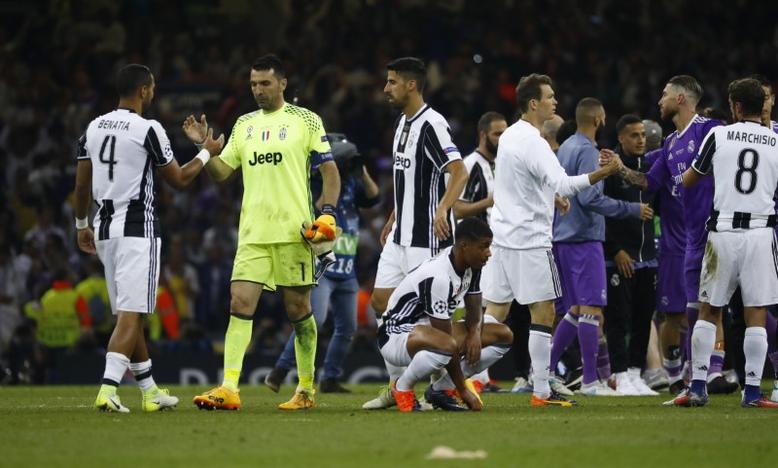 Juventus looked the more adventurous side in the first 20 minutes but it was Real who struck first after the sort of trigonometric build-up that coaches write books about.

Ronaldo was at the heart of it, playing the ball into the path of Dani Carvajal who cut it straight back to allow the Portuguese forward to sweep the ball sweetly into the far corner.

That made Ronaldo the second man to score in three finals, after Alfredo Di Stefano, who netted in five in a row for Real in the 1950s.

Ronaldo’s effort was eclipsed seven minutes later by one of the all-time great final goals.

Juve centre back Leonardo Bonucci drove a long diagonal ball which Alex Sandro reached and cushioned back across the box.

With another volley Gonzalo Higuain knocked it to Croatia striker Mandzukic, who took a touch on his chest and, with his back to goal, struck a stunning bicycle kick that looped over Real keeper Keylor Navas.

The ball did not touch the ground between leaving Bonucci’s boot and hitting the net.

The Juventus fans in the 72,000 crowd erupted, ramping up the atmosphere that was already crackling under the closed stadium roof.

It was a different story after the break, however, and though Juve’s drilled defence initially kept Real at arm’s length, they were undone by a two-goal salvo.

Casemiro made it 2-1 after 61 minutes when his deflected long-range wrong-footed veteran keeper Gianluigi Buffon – who has now lost in three finals – and Ronaldo swept in the third at the near post after a great run and cross by Luka Modric.

Juventus then wilted and finished with 10 men after Juan Cuadrado was sent off in the 84th minute – 18 minutes after coming on as a substitute – following a second booking for the mildest of pushes on defender Sergio Ramos, whose theatrics left a sour taste on an otherwise uplifting occasion.

Asensio tucked in the fourth goal after Marcelo had charged to the byline and Real’s dominance was complete.

“This is one of the best moments of my career – I have the chance to say this every year.”

After a positive start it turned into a hugely frustrating night for Juventus and their coach Max Allegri.

“My only criticism of my team is that after the second goal we should have found a solution to stay in the game,” he said.

“But Real Madrid have important players and when they have a player who wins the Ballon d’Or (Ronaldo) it’s a huge advantage.”

Pogba penalty sets United on way to win over Leicester

Champions Trophy win has reinstated the passion for cricket among youngsters...

In Pakistan, off the field performance weighs more than on the...